Kate, Kate, Kate. I don’t know what you’ve done, but 23.000 dollars? That’s a lot of money honey. You’re really nice for giving it to that nice Australian prosthetic farmer man. Too bad you’re on an island and no one could hear you, except for the now-deceased US Marshall.

Tabula Rasa was a really shocking episode, to be honest. The marshall was really in a lot of pain, and even if most of it wasn’t overt, it was still creepy. In fact: the covertedness made it even more shocking as a whole. Sawyer showed himself to be quite an idiot by being able to shoot a charging polar bear but missing the heart of a dying man lying perfectly still. Thank God our hero Jack rushed in and saved the day. Or something.

Charlie changed the “F” in FATE to the “L” from LATE. Very cute, no? Also, I loved Mr. Locke: he is a wonderful actor, and the mystery surrounding him is wicked. Him making the dog whistle to help Michael out is just great, but he’s still one of those “penny for your thoughts” people. I have no clue what he’s thinking… especially in that last shot of the episode. I can’t wait to find out!
Favourite Quote: Walt: “Mr. Locke said a miracle happened here.”

If you’re reading your first LOST review by me, know that I am cheating. I have seen all episodes up to the end of the third season thus far, and can’t wait for the next batch. Know that I am biased in advance – I simply love LOST.

What to say about LOST’s pilot? Well, the fact that it’s the most expensive pilot episode in the history of pilot episodes and also one of the most hyped aside: it’s brilliant. From the opening shot of Jack’s eye in between of the bamboo trees, the  ask of vodka and the labrador, all the way to the ending shot with the insanely creepy French distress call, it’s a treat. Never is it boring or repetitive or cliché, it’s just great fun to watch. Questions are being set in place, and you just want to watch more.

I was immediately sold watching this episode: I loved all of its characters (which have all been wonderfully cast, by the way) – especially the creepy bald guy who says nothing and has an orange in his mouth (who the hell is that guy?!) and Hurley, who is cute in his own slightly slow little way. Apparently, however, not everyone was sold on this pilot: for many people it was too crazy right off the bat, what with an unseen monster, a distress call and so on. If you are one of these: don’t give up, let yourself be sucked into the story a little bit more. It’ll be worth it.

Favourite Quote: Charlie: “Guys. Where are we?” 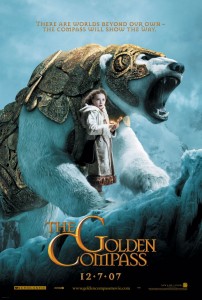 Last Saturday, I went to go see the movie adaptation of what is the first part in the best story of the year (except LOST’s third season), The Golden Compass. I devoured the books, loved them, hated them, and went completely along this emotional roller coaster ride through different worlds. So, with high expectations which I tried to repress, I went to go see the movie, which came out last week.

And, just like most movie adaptations of complex novels, it’s pretty much a mixed bag. This is one of those rare occasions where I would wish that they had shown us less plotline, and a bit more in-depth analysis. And that is my greatest critique: the whole thing felt unbelievably rushed. Oxford! London! Ship! North! gyptians! Witches! Bears! Everything came by at the speed of light, slapping new characters and locations in your face; characters which were not always needed either (one of them wasn’t even in the first book yet). Everything came by, but nothing really stuck around – there was just too much info being told.

I reckon the creators tried to fix this problem with the thing I dread most in movie history: the one-line-in-between-of-scenes-recap. “Oh Pan, we have got to go to Bolvangar and save Roger the kitchenboy who was taken prisoner by the Gobblers which are led by Mrs. Coulter and then bring the Alethiometer – or the Golden Compass – to Lord Asriel,
who is my uncle but not really my uncle!” Oh, the horror, the horror.

And I lied, oh I lied. The above wasn’t the worst part of the movie. The part where they left out the showdown between Lord Asriel and Lyra, that’s actually quite a bit worse. And believe it if you will, it gets even more unforgiving from my side: apparently, all those parts of the movie were intended to be in it. In fact, they were shot! But hey, it’s Christmas: people don’t want no sad ending. They want a happy ending with no message, no sense, no cohones whatsoever. My AUTHORITY!

I did like the way the religious undertone of the book (which as actually not that obvious in the first part) got neutered. The only trace – a chat between Coulter and Lyra about “the authority” and “impurity” – felt like a blissful insider. Really, I don’t think I would mind if the movies stayed this way: leaving the religion as a bit of information for people who read the books. Then stupid people would have no reason to shout heresy were there is none.

I’m sorry for sounding a bit harsh – I did really like the movie. There are so many things done perfectly right. For example: the cast was simply wonderful. All of them were great actors, and Dakota (who played Lyra) simply rocked. Too bad Daniel Craig’s best scene got cut out – making you wonder what he still had to do with the plot – but when he was around, he was all about kicking ass and taking names. The daemons were credible, as well. Not astonishing, mind you – the execution of an etherial, poetic concept is always a bit dumbed down when put into movie – but still well done. Esther (Lee’s hare) was great, as was Pan, who made an exceptionally cute bobcat. The golden monkey was more like a golden collectible wookie statue, though – totally unlike the cuddly bear ready to rip out your guts, not scary at all (especially when compared to Nicole Kidman).

The bottomline: go watch this, but prepare to be annoyed. And then some more.