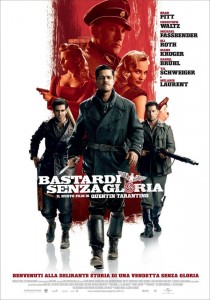 Whenever a new Tarantino movie hits the silver screen, I’m a bit cautious. You see, I’m not a big fan of his work. I don’t really respond all that well to unnecessary realistic violence in movies (case in point: I tend to dislike Zac Snyder movies too). But there’s the thing: the violence featured in Inglourious Basterds is neither unnecessary nor realistic. So I found myself enjoying this movie a lot more than I thought I would.

The story consists of two different storylines: one tells the tale of the Inglourious Basterds, an allied terror unit in World War II with as a single goal killing (and scalping) Nazis. The other revolves around a Jewish French woman and the plans of having a big Nazi premiere there. Both storylines obviously come together at the end, but before that there is a lot of frolicking around in typical Tarantino fashion: with loads of dialogue, resulting in violence.

At first, the dialogues were reminiscent of Death Proof – which I disliked thoroughly. Soon, however, one could tell the big difference between Death Proof and Inglourious Basterds: the cast. This wonderful cast actually carries the insane amounts of insane dialogue, instead of getting carried away by it. Some of the more complicated lines – in four languages nonetheless – were uttered by Christoph Waltz. It was obvious he had studied them thoroughly and knew what he was doing. Stunning, stunning display.

Once upon a blabla

Inglourious Basterds tries to be a bit of a fairy tale. It never tries to be realistic, but keeps the setting correct so it’s credible enough. You know the events at the end of the movie never happened, but – in the world of Tarantino himself – they could have happened (but hell could also freeze over). Also, you don’t really relate to the characters (a thing I’ve actually never done in any Tarantino movie, come to think of it) – whether they live or die, it’s the same thing. You just hope they go out with a bang.

[spoiler]I do have to say though: the Basterds killing Hitler? The manchild in me says that’s pretty awesome. Even though the whole burning cinema fire was poorly executed, littered with continuity errors and a display of very, very bad taste in humanity.[/spoiler]

So it’s a bit of a side story. In that way, it’s a smart plan of Tarantino’s to cut the story into five smaller bits – chapters. Sure, fine and dandy, but this does not work if your first three chapters combined are the length of the fourth or the fifth respectively. The first three chapters felt like introduction, and it wasn’t until the last two that the audience could see where Tarantino was going with this. Had this been an unknown director, he wouldn’t have gotten away with it, I think.

Even though I dislike Tarantino’s movies, I would recommend you go and see this one. It’s pretty fun. The violence has been kept to a minimum, and this time around, it’s not about wildly ejaculating but all about the build-up to the orgasm. Scenes go on for ever as you can feel the tension slowly rising. It’s something I have rarely seen with Tarantino; he’s usually so gun-ho that the load has already been lost before the thing even got off the ground.

And yes, you can go Freudian on that.

Favourite Quote: Lt. Raine: Donny! Got us a German here wants to die for country. Oblige him.