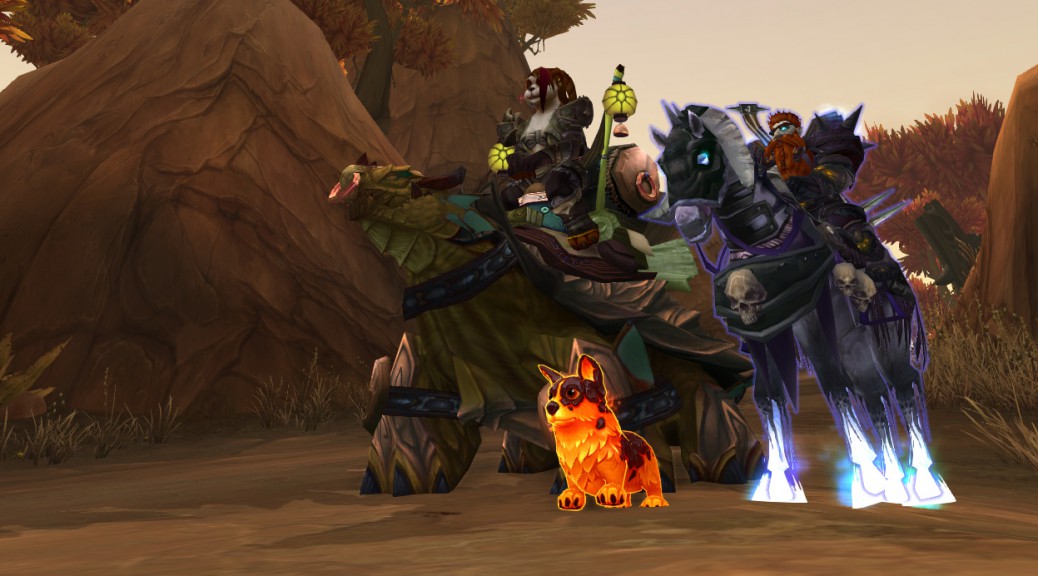 Pictured above: Totoron, my level 95 Pandaren Monk in World of Warcraft – the only game that lets me play a humanoid panda bear riding on a dragon turtle accompanied by an evil-looking dwarf on an undead horse and a cute little puppy that’s secretly made of lava.

Unless you’ve been living under a rock or if you have nothing to do with videogames (like most of my readers), you might have heard about Warlords of Draenor coming out. This new WoW expansion features a new iteration of an old continent, a lot of cosmetic and quality of life changes and most importantly: Garrisons – your own private base, with its own followers you can send on missions or work orders for them to complete.

Now, for most people World of Warcraft is a source of evil (in fact, writing this post will probably get me branded a no-life for the rest of my life). Debuting in 2004, it immediately rose to immense popularity by being the equivalent of gaming crack. Marriages were broken, children fell into neglect and futures were destroyed as players farmed for fire resistance potions to finally kill that sonovabitch Ragnaros. It was a highly addictive experience, one specifically engineered to keep you playing.

Well, guess what: It’s ten years later and the game is just as addictive as ever. The only difference: This is entirely normal now. Many free-to-play games gate their content behind long waits that can be skipped by a paywall – and of course they put the wall precisely where it’s hardest to put their game down. But it doesn’t stop there: A lot of the Assassin’s Creed games (including their newest release, Unity) have a chest that slowly fills up with cash – the speed of which depends on how many sidequests you have done. If you’ve played these games, you know how hard it is to put down the controller – you just want the chest to be a tiny bit fuller next time you play.

And with garrisons, World of Warcraft has finally come full circle. Practically every bit of the garrison content is gated. You send your followers on missions and have to wait for them to return. You want to upgrade your base, you have to wait until the upgrades are complete. Even plants and mining ores grow inside your base on a 24-hour cycle.

And every 24 hours, I want to log on and do five minutes of mining. And of course I’m curious to see whether my followers have successfully completed my missions. And while I’m at it, hey, those upgrades aren’t going to click themselves!

God damn you, Warlords of Draenor, you snuck mobile gaming into my WoW. You have truly created a monster. A wonderful and awesome monster. Something preciousss…

(P.S.: I will probably do a write-up on Warlords’ story once I’m done with most of it. So far I’m halfway through and I’ve seen some interesting things done by a company that’s made more than one dramatic mistake in the last couple of years…)