Before you start thinking this is the blog post in which I finally snap, pull out my mile-long shit list and start insulting everyone who’s ever wronged my poor snowflake writer’s soul, let me put your mind at ease: You’re the worst is a delightful romantic comedy series with a twist:

The couple (pictured above) in question are absolutely horrible.
Which is saying a lot because they live in LA.

Jimmy’s a failed British writer who’s written more about death than Goethe, Gretchen’s a ruthless PR agent who can spin words around faster than the hadron collider (Actually- Does the hadron collider spin? Or do I need to go for a more collidey comparison?). They meet crashing a wedding, have an insane one night stand and then… start seeing each other. What follows are the ups and downs and the what-and-how of two assholes who fall in love and absolutely hate.

I know what you’re thinking – it’s not exactly an attractive pitch. And to be honest: I postponed watching the first season for ages because it felt like a cynical comedy that I just couldn’t like.

But the thing is: I’ve actually grown to like these assholes. The scripts don’t pawn the protagonists off as unlikely – rather, they find hilarious ways to explore what makes a person the way they are, and what happens when people who are out of touch with their emotions are steamrolled by love. Moreover, this approach is wonderfully supported by Chris Geere and Aya Cash, who manage to play their characters tough-as-nails and totally vulnerable at the same time.

You’re the Worst boils down to one of the most realistic and honest portrayals of love. It showcases the give-and-take of a fresh relationship using two characters who don’t know how to do either.

Oh and I almost forgot to mention through all the sappiness: It’s hilarious! 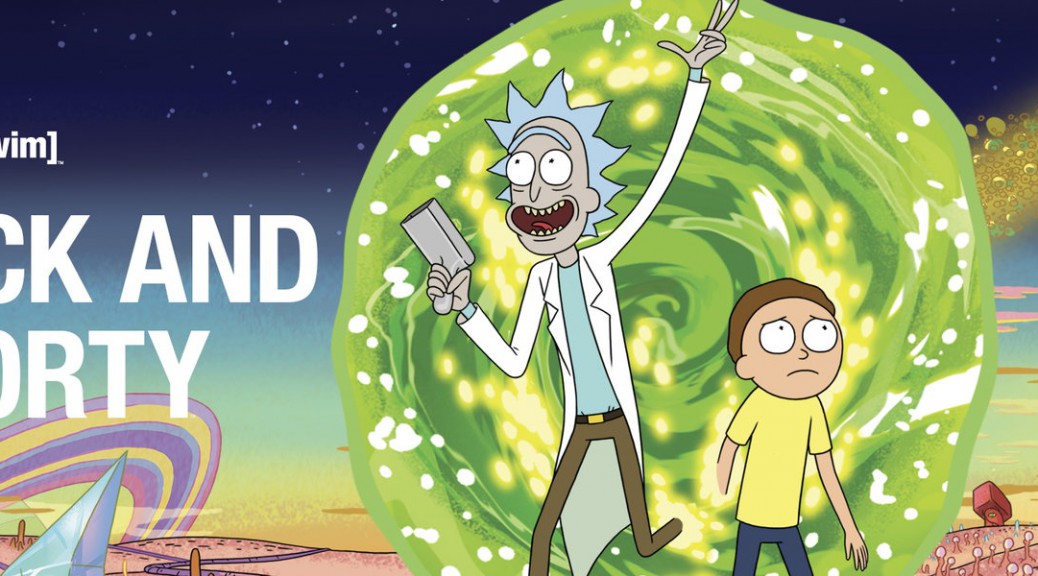 Imagine you have a crazy scientist grandfather.  A bit of a boozer, and a borderline asshole, but in his own quirky way, he loves you and you love him. Now, you’re thirteen, hormones are dancing around in your pants, and you’re in love with this girl way out of your league. Your scientist grandfather decides to help you out with a carefully crafted concoction of insect pheromones that should make you irresistible. And it works! You’re irresistible! Only side effect: The object of your desire turns into a huge roach. You and your gramps try to fix the mistake, but things only get worse, until you grandfather just burps, shrugs and opens a portal to parallel universe in which parallel you and your parallel grandfather die a horrible, horrible death. Problem solved – just take their place! All you have to do is bury your own decaying corpse…

Welcome to Rick and Morty, one of the darkest, funniest, most existentialist animated comedies currently on TV! Penned by Community’s Dan Harmon at his absolute worst and thus, if you know the man, absolute best, Rick and Morty takes the tried-and-true Saturday morning cartoon setting – excited kid and his extravagant gramps have scientific adventures – and completely rips it a new one. Morty isn’t excited, he’s existentially/hormonally confused and in constant fear of his life; Rick isn’t just extravagant, he’s a narcissistic alcoholic with no moral compass or regard for human life. This is Back to the Future on LSD, guys. Better strap yourself in.

For me personally, Rick and Morty hurts to watch. It’s disgusting, it’s weird, it makes the universe around us feel gargantuan and that scares the beejeesus out of me. But in its own weird way, through all the dark humor, this show’s got a brilliantly functioning emotional compass. The two titular characters and their dysfunctional family might constantly be on the verge of a neurotic breakdown – they still do have each other. And that’s the one ray of light that makes this show more than just a dark sci-fi comedy.

“Oh man!”
You can check out this wonderful gem of a show – currently in its stellar second season – on Adult Swim. They’ve even got half of their episodes online. Most episodes work on their own, so start watching!

When was the last time I binge-watched an entire series in a day? Well, the day has come, and the show is Unbreakable Kimmy Schmidt. To be honest, I’d been looking forward to it for quite a while. The reason: This Netflix production (which, for a while, resided with NBC before it was canned and acquired by the online platform)  is penned by none other than Tina Fey.

If we’ve spent any amount of time talking about what we consider funny, you should know the truth: I honestly find Fey one of the most funny people on the planet. Her dialogues are hilarious, her plots come together in the most unexpected ways imaginable – and no matter how absurd her characters get, she never loses sight of their emotional core. At its best, 30Rock was a hilarious comedy chock-full of crazy ideas but with a weird sense of truth at the core.

Unbreakable Kimmy Schmidt certainly appears to take a page from 30Rock‘s book of absurdities, but at its core, the show’s way more down-to-earth and emotionally straightforward – if you can get past the set-up of a young woman (played by a brilliant Ellie Kemper) who gets freed from a doomsday cult after spending fifteen years inside an underground bunker and promptly moves to New York. It’s fish out of water with a twist.

I won’t go into further details. Suffice to say this show is weird, witty and wonderful. It’s drenched in optimism and honesty without being annoyingly corny. And it’s got a totally rad auto-tune theme song about the power of women.

(Little side-note: You will see a lot of women pop up in the credits, which I find awesome – women are super underrepresented and duper necessary in the comedy biz.)

The show’s out of Netflix. Netflix tells me if you love Suits, you’ll love this show. I hate Suits but I love Unbreakable Kimmy Schmidt. Am I broken?