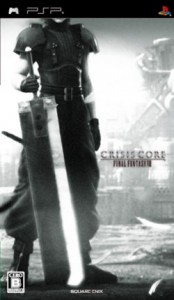 (Note: this review was originally written in two pieces.)

Since, in between of writing papers, going to some classes and waiting for my thesis correction to arrive, there isn’t much to do for me around here, I spend most of my free time either going swimming or playing video games. Most games just don’t manage to really suck me in like they used to, but it’s good enough to pass my time with, I guess. One of these games is Final Fantasy VII: Crisis Core – on PSP. And I’m impressed.
When I first played Final Fantasy VII (the original game), I was about fifteen years old. I remember it as being the video game that left the biggest impression on me during my high school years. It’s this strange kind of being flawed that makes this game so legendary: there’s certain unexplained plot devices, and just because they are not or very poorly explained they work so well. You can fill in the blanks and create your own story. And this is basically what Crisis Core is all about: it takes one of these plot holes and expands it.

(If you haven’t played Final Fantasy VII and plan on doing so, you might want to skip this)

In the original game, we have Cloud – our protagonist – and ex-military officer in a group with amongst others a high school friend of his. When he left his little town, he went on and on about “making it in the big city” and becoming famous. And when he comes back all these years later, his head is filled to the brim with stories about big wars, great villains, strange occurances… none of which he actually experienced. In fact, he become so obsessed with an other member of the army – Zack – that he took what happened to Zack and made it into his own story.

The thing is that, whatever happened to Zack is explained in side notes: you activate little cut scenes when you’re at the right place at the right time. There’s not much to these scenes nor do they contribute to the main storyline in Final Fantasy VII. There’s pieces of a bigger puzzle you just can’t figure out.

And this plot hole is exactly what Crisis Core is all about: Zack’s story from A to Z. Some things you already know (his relationship with Aeris, his parents at home, his showdown with Sephiroth, his escape with Cloud… and his death at the edge of Midgar). It’s like you’ve been given a road map with waypoints, but what the route is going to be, you
have no idea.

You might think it’s entirely insane to make a prequel to a game 10 years after it’s been released. But really: it makes
perfect sense. It entered the porcelain store that was FF7’s story and added some vases. Really pretty, tragic looking vases. And maybe, just maybe, it’s so good because I know it’s going to end badly?

How do you write a story if you know your target audience knows the ending? There are American Beauty, or 300 – both stories of which we kind of knew the ending (or great plot twist, in American Beauty’s case) beforehand. Neither of those had me begging that the end would never come. Neither of them grabbed me on an emotional level. Then, how do you do it? Apparently, Final Fantasy VII: Crisis Core knows. It knows how to walk into a porcelain store without breaking anything and make one of the most beautiful vases in that place even more beautiful.
Needless to say, Crisis Core’s ending tore me apart. We knew that after the Nibelheim incident, Zack and Cloud were offcially labeled dead. But they aren’t. We knew they would escape their lab and go back to Midgar. But what we didn’t really know was why: we didn’t know Zack wanted to go back to see his girlfriend, Aeris (yes, exactly, her). We knew they’d get waylayed along the way, and that Zack would come to a most tragic end. But… we didn’t know that it would hurt this much.

What is the answer to my question? I’m not quite sure myself – yet. But Zack’s final battle against his own company tore me apart. I never quite understood the use of the DMW (which is in essence a slot machine displaying all of your friends – if three line up, you get a power up), but during that battle it finally made sense: one by one Zack’s friends start fading away, until no one remains – except for, exactly, her. Every fade is accompanied by a short movie in which the fading friend says good bye. When, in the end, only Aeris remains, and the DMW starts glitching all over the place, she doesn’t say good bye…

She says she’ll be waiting for him until he finally comes back. And, well, if you’ve got someone waiting for you… that just breaks your heart. And that… that’s how it’s done. It had been a while since I was last moved by a story like this.