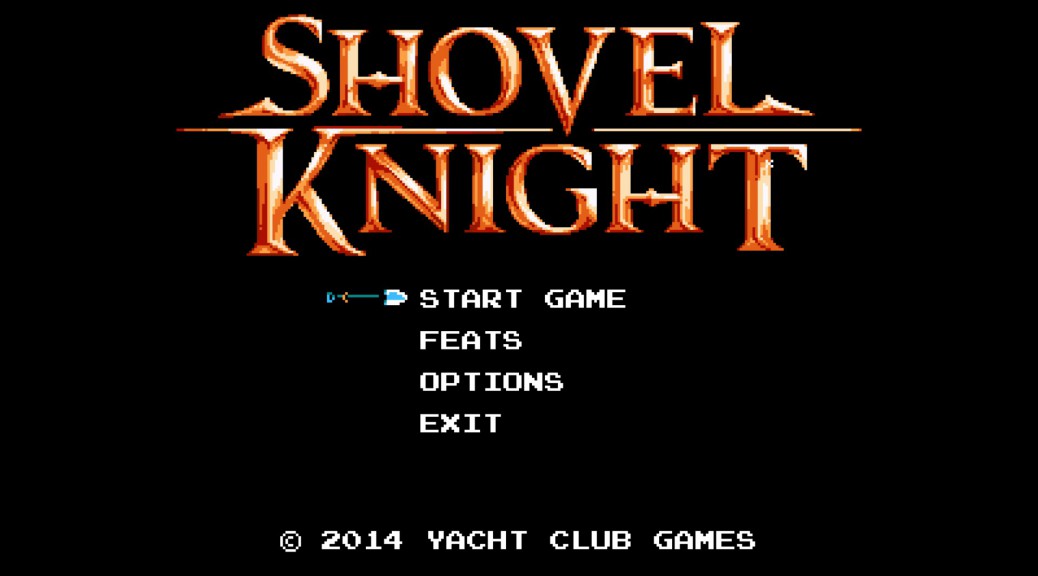 If anyone had told me a year ago that the best videogame story would be told in an indie game about a knight with a shovel instead of a sword, I’d have called them crazy. Even now, I think there’s something off-puttingly internetty about that pitch – like bacon, cake or lolcats, it seems to mistake weird for witty. Shovel Knight promised to be a bad one-note joke that’d run for ten hours of gameplay but be stale by the end of the first level.

I guess promises are made to be broken.

Watch me play some Shovel Knight!

Shovel Knight, a crowdfunded indie game by developer Yacht Club Games, is a sidescrolling platformer in which you take on the role of the titular hero – a knight in shining armour brandishing his mighty shovel – and are tasked to find your buddy, the less creatively named Shield Knight. Everything about this game oozes with homage to the Mega Mans and Super Marios of the eighties. Pixelated graphics, chiptune music, tight and limited controls… It’s all there.

Yet underneath this old-timey coat hides a deceptively modern game – one that’s a lot less painful to play than the platformers of yore. There’s some customization to be had, some surprisingly complex boss battles (given the nature of the game) and a good checkpoint system – which is much needed, as Shovel Knight does not kid around. This game gets balls-bustingly hard, especially in the later levels. Not rarely did I throw down the controller in absolute frustration for missing a jump or dying at the hand of a boss. Yet however angry I got, the game was never in any way poorly designed or unfair. Shovel Knight’s controls are perfectly fine-tuned, enabling some true Mega Man-esque pixel precision play.

In a day and age where sidequests and padding are the name of the game, it’s rare to come across a game that’s streamlined and lean. Make no mistake: A lot of time and effort has been put into making this game the way it is. Shovel Knight succeeds in the basic rule of art: making the creation seem easy.

The same leanness goes for its wonderful, no-nonsense story. Find your buddy. Save the world. There’s no unneeded complexity – just some good ideas and a game that sticks with them. Where Shovel Knight’s story especially shines is in its world-building: It takes the random-seeming shovel joke and creates a world around it.

There’s no other shenanigans to be had: Inhabited by colourful characters of all shapes and sizes (there’s even a trout shaped like an apple), the world feels like a mix between the early Zelda games and a Saturday Morning cartoon. Sure, jokes are cracked about your odd weapon of choice, but they’re varied, earnest and cute. Shovel Knight has little to no cynicism to share: It’s a fairy tale about a hero saving the world. It doesn’t mock or judge or ridicule, not does it try to be cool or daring. Nope: Shovel Knight is courageously normal.

Shovel Knight is a very confident-feeling game. The gameplay is top notch, the story is consistent and straight, the presentating is breathtakingly retro. Every little cog in this machine fits together perfectly, making for a wonderful ride. You can get it on steam, and I suggest you do so. There’s no excuse – the game’s dirt cheap.

Forteen out of forteen pixellated shovels.